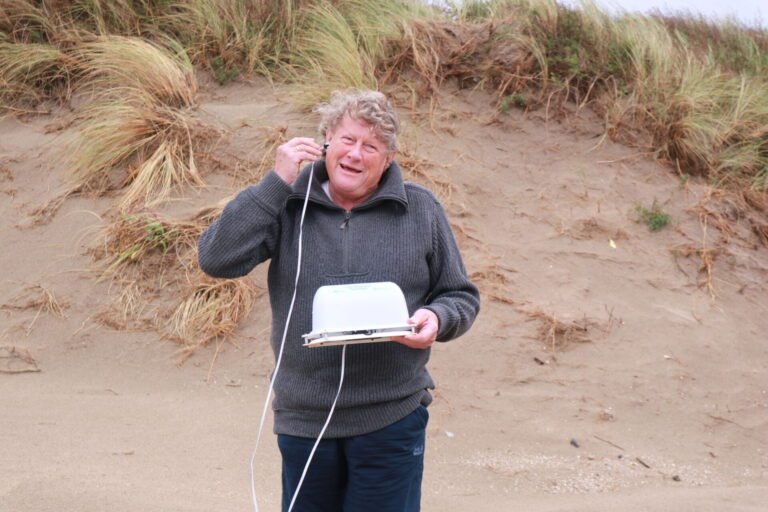 A man holding a HoLu-kit on the beach at IJmuiden Credits: Imme Ruarus

How do Hollandse Luchten participants use their air quality data?

‘Research within research about an existing research project, with added research into the research methodologies that were applied.’ That’s the least convoluted way I can describe what I have been doing over the past few months. Put more concretely: in the Shared Smart City project, our case study utilises the public stack to research potential governance structures in Hollandse Luchten. To understand which areas of governance to prioritise, we wanted to know how the participants of Hollandse Luchten aim to use the air quality data that they gather.

Easy enough, I thought: I could just chat with people when we repair their sensors, and ask them why they’re participating in the project. The research period conveniently overlapped with a reactivation campaign aimed at Hollandse Luchten participants. However, it also happened to coincide with the fourth lockdown in the Netherlands. So what was, in reality, a fairly straightforward research methodology suddenly became as complicated as the research itself.

First, we had to postpone our planned, in-person sessions and hand out sensors at the door while maintaining a safe 1.5 metre distance instead. There’s not much time to conduct research while standing 1.5 metres from someone’s front door, and while we did share paper questionnaires with participants, only one person responded. So I called people instead. Trying to combine a casual, ‘how is your sensor functioning?’ check-in with a semi-structured interview on ‘what do you want to use the data collected in Hollandse Luchten for?’ resulted in eight phone calls lasting between two-and-a-half minutes to thirty-four-and-a-half minutes. The open research question I asked was interpreted differently by everyone.

Many participants expressed an interest in the technical aspect of the project by suggesting additional metrics for measuring or offering to help repair the sensors. Many participants also showed an interest in finding the sources of pollution. This interest showed up most clearly through a repeated request to add wind direction to the map. There were also several suggestions for technical expansion of the data collection: from additional features to the hardware (e.g. measuring other types of pollution) to ideas for software development and methods for analysis.

A lot of the participants also have an interest in connecting with others over the data. In IJmuiden, participants hope the data they collect can spark better conversations about the topic of air pollution. In Wijk aan Zee, air pollution is already a hot topic and there appears to be an active community surrounding the issue. There, sensor holders hope that the data from Hollandse Luchten can assist in the lobby for policy change. For both regions, storytelling is an interesting method to explore further. Participants also want to communicate with others — not only their fellow sensor holders, but also people outside the project — about the data and the problem of air pollution. But the message is complex and nuanced and it takes time to tell the whole story.

The same holds true for our research, so we invited all the participants to take part in an in-depth session to talk more about their data goals. We hoped the discussion would add further clarity to how Hollandse Luchten participants would like to utilise the air quality data that they gather. You can find out more about this session in this blog.